The historic Agricultural Engineering Building, built in 1907 and added to the National Register Historic Places in 1985, is situated at the corner of Henry Mall and Linden Street. It is the main building for BSE, and houses department administration, offices, and classrooms.

The Agricultural Engineering Building was one of the first buildings built at the University Of Wisconsin by renowned Campus and State Architect, Arthur Peabody, who also designed Memorial Union, the State Office Building, and the Field House. It was built in a Georgian Revival style with reddish-brown brick and red roof tiles, in line with the dominant architectural style on campus at the time. The front entrance is framed by a pediment resting on two columns with distinctive semicircular fanlights on the three main sides.

Upon its completion in 1907, the ground floor was occupied by cement and power labs, with offices, lecture rooms, and shops on the main floor. The top floor was a single large room used for machinery display and study. As enrollment expanded and agricultural machinery grew in size, the department was ever more constrained by the size of the building. To alleviate this pressure, the Agricultural Engineering Lab was built in stages in 1958, 1968, and 1981, with the Agricultural Engineering Building being remodeled in 1968 as well.

Many historic events in Agricultural and Biological Engineering have taken place in this building over the years, such as Edward R. Jones’ soil erosion and drainage studies, Floyd W. Duffee’s development of the first forage harvester in 1927, and many significant developments in concrete construction. The founding of the American Society of Agricultural Engineers (now ASABE) took place here in 1907, as the University of Wisconsin’s Agricultural Engineering program was one of the first in the nation.

Feldman, Jim. 1997. The Buildings of the University of Wisconsin. 108-109. Madison: The University Archives. http://digital.library.wisc.edu/1711.dl/UW.UWBuildings.

There are multi-stall restrooms on the lower floor, and an all gender restroom on the second floor.

Administrative and Other Facilities 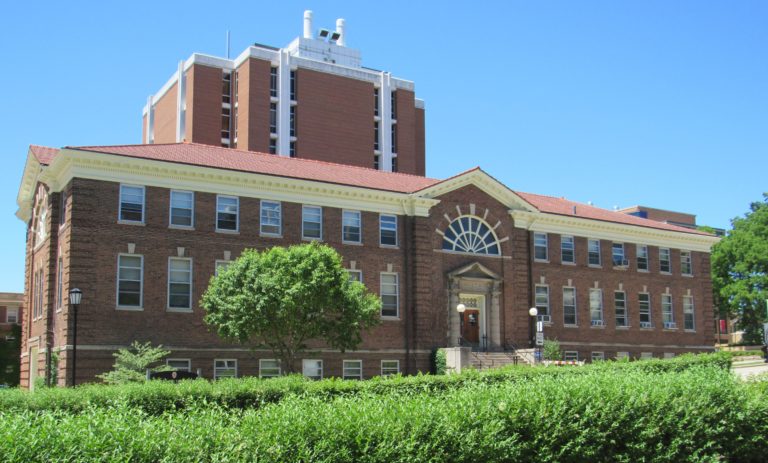